Interview with an Archaeologist

Hi! I’m Aspen Arnold, the 2021 Historic Specialist at the Stanley Museum. Recently I had the opportunity to interview the Forest Archaeologist for the Sawtooth National Forest, Doug Baughman. As a student of anthropology, I was excited to hear what someone in his position does day to day on such a large area of land. I was excited to see what information and advice he could share with me.

I asked Doug what got him into archeology. He said that he always loved dinosaurs and originally wanted to be a Paleontologist. When Raiders of the Lost Ark came out in the 80s, his interest shifted to people and how different cultures solve basic needs in unique ways. He attended the University of Washington studying anthropology and spent a summer surveying, excavating, and transcribing historical documents for a volunteer program in the Boise National Forest. The summer between his junior and senior year he went to Ecuador for 6 weeks to an archaeological field school, where he experienced the different laws Ecuador has for human remains. During grad school at Central Washington University, he took a seasonal job at the Modoc National Forest in California. He worked at the Modoc NF for 5 seasons, where he learned invaluable skills that would help him in his future. Subsequently, he took a permanent job in the Plumas National Forest in Northern California as the Assistant District Archaeologist. After 8 years, he transferred to his current position as Forest Archaeologist for the much larger Sawtooth National Forest. Because of his familiarity with the Plumas National Forest, he is currently the acting Heritage Program Manager until the permanent manager starts later this month. 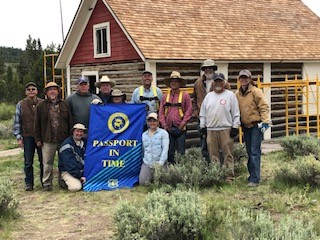 I asked Doug, “What is the main goal of forest archeology?”

“Ultimately our job is the protection of cultural resources. They are a non-renewable resource. Once they are gone, you cannot get them back, ” he responded. The goal and responsibility of an archeologist in national forests and recreation areas is to avoid adverse effects to cultural resources. He emphasizes that it is extremely difficult to completely avoid all adverse effects, so his job focuses on minimizing the effects. He works with the State Historic Preservation Office and Native American Tribes, each with a different level of value placed on the resources, to try and reach an agreement in order to continue with a project. This means a typical work week includes many emails. “Good communication is key to successful projects,” he says. Doug spends his summers looking over proposals and conducting field surveys to identify resource sites near current projects areas where there could be potential negative effects, or APEs. He spends his winters preparing for the summer, writing reports and entering data into the cultural resource database. On his own time, he reads about local history and archaeology in order to familiarize himself with the area and things he might come across. He says his favorite part of the job is having the opportunity to hike in this beautiful area looking for sites, and then going back to research them.

My last few questions were more for me, personally. As someone who is going into the field of archaeology and anthropology, I wanted to know what skills he felt helped him the most and any advice he had for me. He reiterated the importance of knowing the area and resources of your area, as well as empathy. Empathy for those who care for the resource, but also for the ranchers and farmers who are trying to make a living in the area. Having an open mind and the ability to see the big picture for all those involved make the job go smoother.

We often hear titles and positions, but really have no idea what they do in the field. It was a great opportunity to really see forest archaeology directly from someone working in it. It is important to become knowledgeable about our forest and the people who work hard to ensure its beauty and protection.

Aspen Arnold is the Historic Specialist with the Sawtooth Interpretive and Historical Association. She majored in Anthropology at Utah State University.

The first photo is of Doug Baughman.

The second and third photos are of a “Passport in Time” project for the Historic Pole Creek Ranger Station located in the Sawtooth National Recreation Area. More information about this project can be found at passportintime.com.

Stay connected with us!